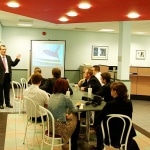 I am of Welsh-Scottish heritage, born in Berlin in the late 1960s to a Scottish soldier and a Nairobi-born book editor and teacher.

I worked with people with learning disabilities (1990s-2000s), developing work training with clients, then led retreats and training days as Ammerdown’s Training and Interfaith Officer (2010s).

Since 2014, I’ve been a Lecturer in English in Swindon, UK.  Teaching is active listening: I learn daily from students how to enable them to express their gifts and capabilities.

I continue to lead music retreats, and training events, in various locations across the UK, including Ammerdown and Minsteracres, Belmont and Douai Abbeys, and Launde Abbey, as well as at numerous parishes and for diocesan and other organisations.

I am a choral poet (librettist), gaining commissions internationally with composers such as Kim Andre Arnesen, Janet Wheeler, Chris Hutchings, Carson Cooman and Paul Spicer. Several major work and a host of smaller pieces, including best sellers such as ‘Flight Song’ have resulted.  2018 saw the release of three of my texts on a major record label, Naxos.

My writing is a song of living, vital, abundant life behind what is seen, infused by reading and learning from the work of great international poets.

I believe passionately in getting to know the other; tolerance is not enough; an active respect means we honour, celebrate, engage and learn. Difference is not a threat to our identity, but enriches it.